When temperatures crept into the 80s on Tuesday, it seemed like almost everyone was playing hooky in Rehoboth Beach, a sleepy Sussex County resort town no more.

Seasonal T-shirt businesses came to life, bikinis were out in full force and the high-pitched screech of circular saws from local construction almost drown out noisy, cackling gulls.

About one in every three people seemed to walking dogs (tail waggers are allowed on the beach and boardwalk until May 1). It was tough finding an open parking spot on Rehoboth Avenue (free until the meters go into effect May 26). Queues were long for popular foods like buckets of salty, vinegary Thrasher’s Fries and twisted cones of creamy Kohr Bros. frozen custard.

But beach visitors weren’t just looking for boardwalk fries, pizza and ice cream. Another food vendor that seemed to have a steady flow of traffic throughout the day was the new Mason’s Famous Lobster Rolls shop at 67 Rehoboth Ave. (It’s next to Nicola Pizza.)

Lobster rolls, New England’s hand-held heirloom food, are having a heyday like no other seafood sandwich. Well, given this is prime crab cake country, maybe the lobster roll is the second most popular shellfish sandwich.

My favorite lobster rolls in Delaware have been found at the Henlopen City Oyster House at 50 Wilmington Ave. in Rehoboth, and George & Sons’, a seafood market at 1216 Old Lancaster Pike in Hockessin, which has a raw bar and casual eatery.

Mason’s Famous Lobster Rolls in Rehoboth opened in March and it is a spin-off of another location in Annapolis, Maryland. It’s a fast-casual eatery: You order at the counter and pick up the food. Take-out also is available. It’s open daily from 11 a.m. to 8 p.m. 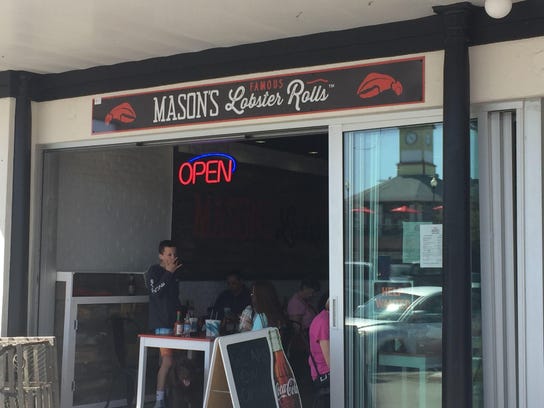 The dining room, with seating for couples and groups of four and more, has glass slider doors which were wide open during my visit. You can feel the breeze from the nearby ocean and, if you want, fist bump a sidewalk passerby. I have a feeling this place is going to become even more popular as summer approaches. Eating fresh seafood near the sea never seems to go out of style.

If you don’t want to eat inside, take your lobster roll and plant yourself on one of the many boardwalk benches facing the ocean or at the Rehoboth Beach bandstand. Just watch out for those greedy gulls.

I got the classic lobster roll ($14.99), 3 ounces of tail and claw meat bundled onto a crisp, toasted, buttery roll smeared lightly with mayonnaise. The rosy lobster meat, flown in from Maine, was fresh and sweet with a light drizzle of lemony butter. Bottles of locally owned Peppers hot sauce or Tabasco sauce are on the tables, but unless you’re a confirmed chilehead, it’s not needed. Let the shellfish shine on its own.

The lobster roll is a very satisfying meal, though, if you’re ravenous, definitely get some sides. There’s lobster bisque or New England clam chowder ($4-$6) as well as potato salad, cole slaw or Cape Cod chips ($1.50 each.) For $3 more, I added a cup of potato salad and a bottle of handcrafted Maine root beer that has wintergreen, clove and anise flavors. The potato salad, heavy on the mayonnaise, was pretty good, though the spuds were a little mushy. The caffeine-free soda, a very good chaser, could have been a tad colder.

Die-hard crab fans might be happy knowing they can order a crab roll ($14.99) or jumbo lump crab meat tossed with mayonnaise-celery-lemon-dressing. How is it? I don’t know. If I’m going to a lobster shack, I’m getting lobster. For more information, visit masonslobster.com.

Be part of the Mason's family. Sign up now to receive exclusive offers and promotions, and be the first to know about new product offerings, events and more!